Are DAOs the future of Nonprofits? Probably not.

Published by Mubarrat Choudhury on July 28, 2022 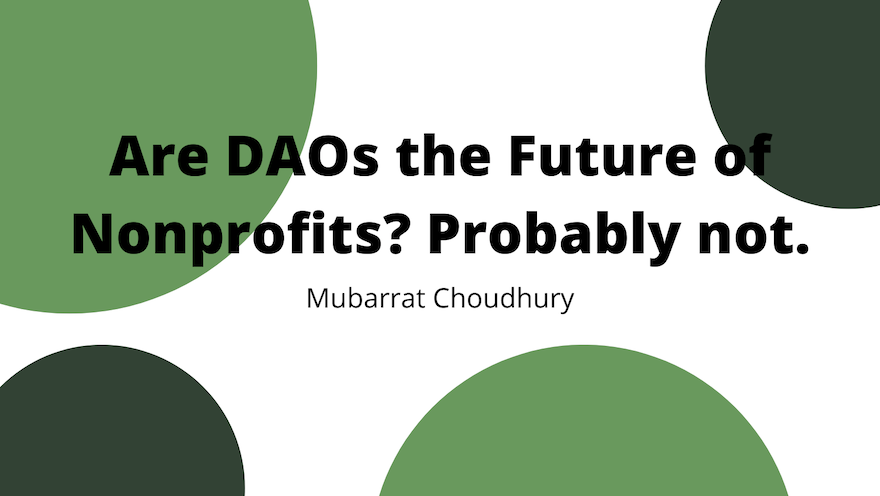 The buzz around Crypto, DAOs, and Web 3.0 have significantly increased in the last few years and there has been some discussion that has seeped into the nonprofit industry. For many crypto evangelists, there have been calls for DAOs to be the future of nonprofit organizations because they could potentially provide better incentives, organization, and transparency than nonprofits today.

This post will be an investigation into whether or not that is truly the case.

What is a DAO?

A DAO is also known as a Decentralized Autonomous Organization and it is often a group of people that come together for a shared purpose in a manner where there is no centralized authority instead governance, rules, and cooperation is determined by smart contracts that are stored and programmed onto specific blockchain such Ethereum or Solana. Smart contracts allow for rules to be established via code, and can be automatically initiated once certain conditioners are met without the need for a centralized authority. An example is the ability to send money to someone without the need of Venmo, Visa, or any other centralized authority, and instead directly through the Blockchain.

DAOs usually issue tokens where people can buy into a membership, allowing them to vote on issues that are to be decided with consensus. DAOs have popularly been used in funding investments, like Orange DAO comprised by Y Combinator founders, running an exchange like Uniswap, or creating an exclusive community like Bored Ape Yacht Club.

Are DAOs the future of Nonprofit Organizations?

The hype around DAOs not only as a replacement for nonprofit organizations but management, in general, has been written about immensely, particularly because it essentially automates and extrapolates many of the decisions away from any centralized hierarchy (which is the ultimate purpose of any corporate structure) and instead allows for these decisions to be both democratized and streamlined.

The aura around DAOs is appealing because it promises faster and more equitable decisions, but once we start peeling back on the promises, we find that there might be more glitter than there is gold. Streamlined decision-making might seem alluring, especially since nonprofits are notorious for being slow in everything that they do, but the value of making decisions as fast as a DAO can isn’t inherent to the organizational structure. Smart contracts themselves aren’t unique to DAOs nor crypto, and can even be used by existing nonprofits with a top-down hierarchy to extrapolate many decisions they have to make today—such as foundations choosing which organizations to grant money to. Smart contracts, however, shouldn’t be seen as the end-all answer to increasing efficiency. Establishing smart contracts could be great to cover decisions that are continuously made with the same conditions, however, unlike humans, smart contracts aren’t that great at assessing and taking account of edge cases whenever they come up.

Lastly, and probably more importantly, for a lot of states with existing corporate structures for nonprofits that are inherently membership-based, however in the formation and general maintenance of the legal entity, many states require hierarchy. For many states, when a nonprofit is incorporated, the organization's President, Secretary, or Treasurer must be clearly stated in the filing documents. Until the concept of DAOs become more refined in being able to also be a replacement for existing corporate structures, it’s unlikely they’ll gain traction within the nonprofit world.

.NGO is a technology company that is building the giving infrastructure of the internet. Nonprofits from around the globe, both big and small, can accept donations and manage their organization online.

We’re building the first ImpactOS online where charities all around the globe can manage and grow their nonprofits with the best technology available.

Currently, we're in closed beta. If you want to start using our product today, then visit https://www.dot.ngo/beta

These cookies collect data to remember choices users make to improve and give a better user experience. Disabling can cause some parts of the site to not work properly.

These cookies help us to understand how visitors interact with our website, help us measure and analyze traffic to improve our service.